So this inspiration attack wasn't a false alarm as I feared. On Friday afternoon, I produced an entirely new draft with a different, more storygame-y, rules engine. Since then I've been tweaking it and I think its fairly playable.

In any case, I've made the document available for your perusing. As you'll discover, it's of the lean and mean variety of roleplaying games, with short rules and (I hope) interesting gameplay. The current engine hasn't been properly tested yet, but if you want to let me know what you think, you can either comment here, on the document itself or on one of my Google+ posts.

To the initial donors and alpha testers, I know I promised you'd be the only ones to have early access to the game, but I figure the more eyes looking at this, the faster you can play with your friends and family.

After months and months of being inspired to do other things games-wise, I just spent twenty minutes of valuable day job time taking these notes. Is it because the fun game of 3:16 of Friday night, or the link to a cool looking Lego RPG (look in the hacks list) I got via Étienne Bar this morning? Or maybe it took so long for my subconscious to chip away at my game design block. In any case, I may very well be onto something...

More later. Hopefully before a whole bloody year has passed.

Posted by Eric Nieudan at 3:54 PM No comments: 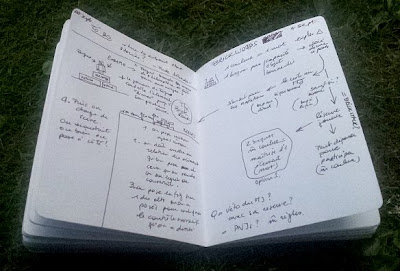 What's this in your RSS feed? A long overdue update! I'll keep it short because the time I'm spending writing here I don't spend designing the bleedin' game.

Diceless. I'm working on a brick-powered resolution engine, inspired by the feedback from Thomas Laborey and Bastien Wauthoz. I have a lot of notes and a rules set is starting to take shape. I hope to playtest it soon and see how it all works.

Funded. I do not accept Lego donations anymore. Thanks to the donors and birthday presents from friends and family, I have more than I need. Now there's no excuse to not finish Brickworlds.
Posted by Eric Nieudan at 5:04 PM No comments:

Oh hai, internetz. Despite the abysmal lack of updates on this here blog, Brickworlds is still alive. The alpha rules have been delivered to the donors in time, and the game has even attracted some interest from the fine folks at the French RPG Federation, (yes, we do have an RPG Federation).

We had another session with my 9-year old alpha tester. Highlights were zombie and skeleton pirates, an evil undead warlock on a dragon and some very creative building. This time there were two characters - Rizzo the Cowardly Explorer and Reverence the Smily Child Comedian which helped with testing the conflict resolution system. In the end, Reverence even called his father and brother (who happens to be Jax the Smily Army Captain from our first session) for reinforcements, so we had an epic finale featuring seven minifigs and a brick boss.

While a lot of fun was had by all, the rules kind of got in the way of the story. I thought kids loved rolling dice, but there's a limit I reached during the last fight - I could see Sean's eyes glaze over when I asked for yet another roll. He was much more interested in narrating how his pet snake was sneaking behind the warlord to poison him.

Technically speaking, I realised health points and Tunnels & Trolls style rolls have a tendency to drag out fights. Too many bleeding rolls! Also, having to summarize how many dice are rolled every time ("one for you, one because you're a stormtrooper, one for your blaster...") makes it hard for a child  to roll by himself.

I had some suggestions from FFJdR's Thomas Laborey and I might drop the dice altogether. Or just keep one for the group (this would also make the game more accessible, as you wouldn't have to buy a Lego boardgame). We'll see when I have some quiet game design time.

(I could ask for your thoughts on the dice vs diceless question, but nobody ever comments on my posts, so I wont ;)
Posted by Eric Nieudan at 5:02 PM 4 comments: 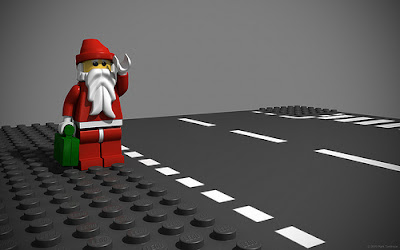 It's been almost two months since our first semi-improvised session and by now the game should be almost finished. But due to work sucking up all my creative energy, it isn't. To be honest, it hardly moved since that time. I don't feel great about this situation, especially since some of you guys have spent actual money to send me bricks, but there isn't much I can do about it.

I know you're not interested in excuses, so I'll wrap it up. There will be an early beta game for the donors to playtest. My most realistic estimate is some time during the holidays. Do not expect anything fancy, but I should have a quick and dirty set of rules for you to play with.

So see you there, and make sure your kids get the Lego they want from Santa. You'll need them!

There was an impromptu test session today after school. I had no definitive rules, no setting and no scenario, but I had an eager 9 year-old. Also, I really wanted to try some things out.

Sean chose the Gladiator minifig with a different, more cheerful head, and I asked him to fill the following template: [Name], the [behaviour] [job] from [world]. He wrote "Jax, the smily (sic) Army captain from Alostorus". He described Alostorus as "a dragon and ninja world".

I showed him the weapon rack, the potion shelves and some miscellanous items and he chose a spear, a round shield and a potion. ("What's the orange potion?" "I don't know... Strength?" "Okay, I'll take it.") He customised his Hero dice with yet another Strength power - I'll explain these in a further post - and character creation was over.

As the Army captain of a border town in Alostorus, Jax was asked by the mayor to look for a missing person. A potion merchant should have come through the jungle a week ago. I won't tell the whole story here for fear somebody steals it and writes a best-seller, but there were pirate slavers, a raging river, a car wreck and a destroyer drone. All in less than an hour.

I got several important lessons from this session.
There you go, Brickworlds is an actual game now. I should maybe start writing down some of these rules as well. In any case, I'm looking forward to doing more tests. After all, we never learnt what the pirates were doing on Alostorus...

Donation update: two great kits were sent via the Amazon wishlist (thanks, Cédric and Guillaume!), and two more were given by my friend and flatmate Chris. Photos are linked on the donors page.
Posted by Eric Nieudan at 9:40 PM No comments:

You know the way you want to build things all the time when you have Lego in hand? Well, it's the same with game designing. Every time I think about a problem to solve, I feel irresistibly drawn towards the brick box and before I know, I'm building things. It's like it's my hands are doing the thinking. Very disturbing. I have zombie hands. Send help, please.

I was brainstorming (handstorming?) what I call the Hero's Pocket, what you video game types would call Inventory. You know, the semi-realistic space where you store all the stuff you pick up on dead monsters. The ugly looking series of pictures below show how I started and where I ended up.

This is the player's pack from Heroica. It has health points (the red cones), a row for gold, and a rack for weapons and items.

At first I thought I'd simply use that, but then one brick led to another and my brain had to follow my hands.

I wanted something bigger, so I took a 6x6 plate and got to work. You can see a key, a gun, a seaweed bit that I figure could be some kind of entanglement spell, a potion, a telescope, a cutlass held by a hook brick, a door (another spell: think teleport or something) and a spare costume (an option I probably won't use, but it's here for completeness sake). On the left, I used tiles from Heroica to hold items.

Version 2: The not-so-good looking one

In this version, you can see the same equipment on a grid made of Heroica tiles. It can hold only nine items, and the central spot is occupied by a stack of health points.

It worked, but it didn't look great. I wanted the health bar back.

My last tweak was to move the tiles to one side, leaving a row for health. The three tiles at the top are only halfway on the plate, but it's sturdy enough.

Now we have 9 items and up to 6 HP, which should be more than enough. Note that as a reward, I may allow small containers, such as treasure chests, to be placed on the pocket and filled with small items.

If you feel minimalistic (or should I say, mnmlstc), you can simply use a minifig stand. It has four spots, which is an elegant way of displaying health counters. Equipment can be stored in a box and just left next to your health. Or you could go the full-blown BrickQuest way.

Note that you don't need the red cones for health. Any bricks of the same size will do. I'd advise the traditional red colour, but your taste might vary.

So there you go: a look at Lego game designing and your first glimpse at the Brickworlds rules. Have you any insight or advice ?
Posted by Eric Nieudan at 9:38 PM No comments:

Brickworlds is a roleplaying game I'm designing to play with my friends and family. It's about heroic ninjas, wise jedi and dark knights hopping from world to world, helping minifigures in need.
To play, you will need all the Lego you can find, a handful of dice and the imagination of a five year-old.
Contact me